The Embassy of Italy to the State of Qatar and Triennale di Milano, in partnership with Msheireb Properties, presented on the 17th of October, in the prestigious location of the Msheireb Enrichment Centre, the exhibition “The Shapes of Water”, a survey on social design and product design projects related to different uses of water.

The exhibition, open to public for free from the 18th of October until the 3rd of November, comes from a project of the Italian Ministry of Foreign Affairs and International Cooperation (MAECI) with Triennale di Milano.  The framework of the programme, “Italy, Cultures, the Mediterranean”, is an initiative launched by MAECI to encourage dialogue and cultural exchanges, and promote the various cultural forms and identities of the Mediterranean region, the Middle East and the Gulf.

“The Shapes of Water” exhibition deals with the theme of environmental sustainability, and specifically water, a fundamental resource for mankind that has turned into a precious commodity, and in some cases, into a cause of geopolitical tensions due to its scarcity in certain territories. However, the use of water and its governance have always been a subject of interest for design since, as it is perceived as a limited resource, water has become more and more relevant for business and commercial purposes. The idea of the exhibition is to present water as a bond – not as source of division – between peoples and to return to the authentic social and civil concept at the core of design.

“We are particularly pleased”, said the Ambassador of Italy to the State of Qatar, H.E. Pasquale Salzano, “that Doha represents the first destination of a prestigious travelling exhibition, which will bring a selection of innovative and creative design objects in other countries of the region.”

“The Shapes of Water” exhibition is composed of two sections. The first section provides an overview of items related to different uses of water (condensing, collecting, carrying, extinguishing, farming, filtering, keeping, purifying, washing), made by international designers. Pride of place has been given to those projects that offer innovative solutions to the problem of water scarcity. The second section showcases some specially made items to express the primary function of water “to quench one’s thirst”. This is a series of works aimed at reinterpreting the archetypical shape of the jars according to the different issues and needs of the designers’ countries of origin, with a particular focus on local manufacturing, traditional techniques and materials.

Ambassador Salzano continued, “The items of these designers, even if inspired by different – although very close – cultures, traditions, languages and skills, are able to build a weft of reflections which celebrates the binding, cohesive nature of water for those countries that, from the Mediterranean Sea to the Gulf region, present a great variety of values and cultural identities”.

Mr. Ali Al Kuwari, Acting CEO Msheireb properties said: “Msheireb Properties, a developer of one of the most Sustainable City Districts in the World, is proud to be part of this cultural and artistic event and host such an exhibition at Msheireb Enrichment Centre, the landmark destination created by Msheireb Properties that serves as an educational portal showcasing Qatar’s glorious past and soaring ambitions for the future. It is the perfect place for cultural exchange that build connections between people and civilisations. We thank the Italian Embassy in Doha for their effort and curating this artistic exhibition to the people in Qatar, and look forward for more collaboration.”

The number of countries represented in the exhibition is quite impressive: Italy, France, Spain, Croatia, Greece, Turkey, Tunisia, Lebanon, Jordan, Bahrain, and Saudi Arabia. On show is also the work of the young Qatari interior designer Shaikha Al Sulaiti. Her art piece, named “Msheireb Light”, is a symbolic representation of Qatar’s support to the concept of truth, clarity and transparency. “I realised this object by reusing a bottle from a Qatari brand, with the idea of up cycling in mind”, Shaikha Al Sulaiti explained at the opening of the exhibition. “It is composed of three materials: the Rosso Levanto marble, which reflects the colors of the flag of my country; water, which symbolizes the concept of truth; and the brass, representing the prosperity and success of Qatar. The quote in the brass comes from our national anthem. It reads: ‘Qatar will always be free – By the spirit of the loyal’”.

“Today, from Doha, we are sending out a very powerful message of cultural inclusion and openness to diversity” – concluded Ambassador Salzano. “Qatar does not close the doors to cultural exchange, to dialogue, to cooperation. Qatar is an example of inclusiveness, no matter where an art piece comes from. Culture is meant to express the best side of human beings and is a powerful means to overcome divisions”.

The exhibition “The Shapes of Water” is the first event taking place in the framework of the Qatar Sustainability Week – from October 27th to November 3rd 2018 – an initiative promoted by the Qatar Green Building Council (QGBC), under the patronage of the Prime Minister and Minister of Interior, H.E. Sheikh Abdullah bin Nasser bin Khalifa Al Thani. During the opening of the exhibition the director of QGBC, Eng. Meshal Al Shamari, presented the programme of activities scheduled for the Sustainability Week, which is meant to raise awareness in the public opinion on the theme of environmental sustainability. 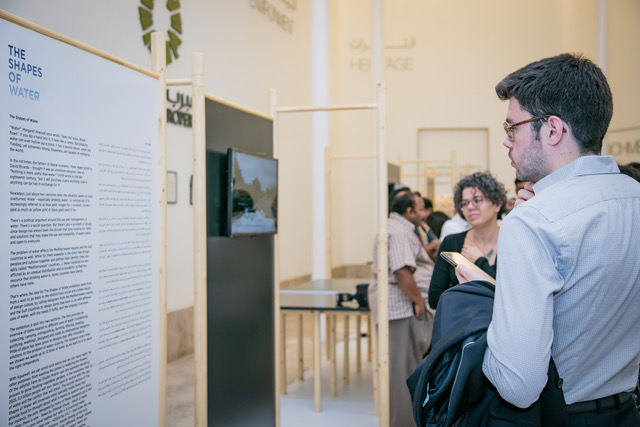