The Qatar Financial Centre (QFC) announced today its relocation to Msheireb Downtown Doha (MDD). New QFC firms will be able to operate from this new designation starting mid-2017. Existing firms can decide to migrate then, or starting 2018. This relocation will serve as a foundation for Qatar’s new financial city.

Unlike other financial zones in the region, this new financial city will be open to all businesses, local and international and will not be exclusively restricted to QFC licensed firms. As such, it will be closer to other international financial and business districts. The mixed-use development will comprise more than 100 buildings, with a combination of prime commercial and residential properties, retail, cultural and entertainment areas.

The inclusion of a number of national entities and government buildings within Msheireb Downtown Doha as a whole represents a significant step toward the realisation of deeper collaboration and economic integration. Msheireb Downtown Doha will encompass five heritage quarters and multiple geographic phases. Tenants will include major government buildings, heritage quarters, four heritages houses within Msheireb Museums, a school and the National Archive, as well as the recently opened Mosque. The result will be a lively urban neighbourhood, which as well as hosting the Qatar Financial Centre and its licensed firms, will also offer leisure facilities and a number of residences including townhouses, upscale apartments and hotels, all centred around a new public square, Barahat Msheireb.

Announcing the QFC’s newest and largest designation, CEO Yousuf Mohamed Al-Jaida said: “The Qatar National Vision 2030 economic development pillar stipulates the need for open and flexible economic structures, which QFC offers through its business-friendly platform. It also states the need for the creation of a stimulating business climate capable of attracting foreign funds and technologies, and encouraging national investments. At the QFC, we have been steadily building such an environment. Through this relocation, we are taking a giant leap forward on the path of economic diversification.”

“The Qatar Financial Centre’s relocation to Msheireb Downtown Doha is representative of Msheireb Properties enduring promise of enhancing the economic and financial dynamism at Msheireb Downtown Doha. It also revives the history of Msheireb area which has always been a major centre of business and trade. This designation is further emblematic of our commitment to driving leadership, innovation and excellence through challenging convention and finding new methods of leveraging our developments for the way people and companies live, work and conduct business in an integrated, enriching and sustainable mixed-use community,” said Msheireb Properties CEO Abdulla Hassan Al-Mehshadi.

Al-Mehshadi added: “Msheireb Downtown is distinguished by its high-tech infrastructure and being a leader in smart city solutions which consists of state-of-the-art technology that integrates multiple information and communications systems required in the financial sector. Additionally, this relocation will impart confidence to international investors and partners, and will enhance Qatar’s position as a major regional and international financial hub. This will play a central role in diversifying the economy as part of our pledge to the Qatar National Vision 2030.”

Offering businesses and their occupants a modern integrated working lifestyle, Msheireb Downtown Doha blends traditional Qatari heritage and aesthetics with modern technology, and has a strong focus on sustainability. With more than 100 buildings targeting LEED (Leadership in Energy & Environmental Design) gold and platinum ratings, it will be home to the world’s highest concentration of LEED buildings in the world.

The project also leads in terms of transportation and facilities with cars and traditional services placed underground and a full-scale public transport network, with the aim of creating a pedestrian and environmentally friendly atmosphere. The project will be served by Msheireb station, which has been billed as the hub of the upcoming Metro network, being the major interchange station for the lines.

Following the QFC’s relocation and move of QFC firms, other QFC entities including the Qatar Financial Centre Regulatory Authority (QFCRA), the Qatar International Court and Dispute Resolution Centre (QICDRC) and the Qatar Finance and Business Academy (QFBA) will relocate as well. Their relocation is expected to be complete in 2019. 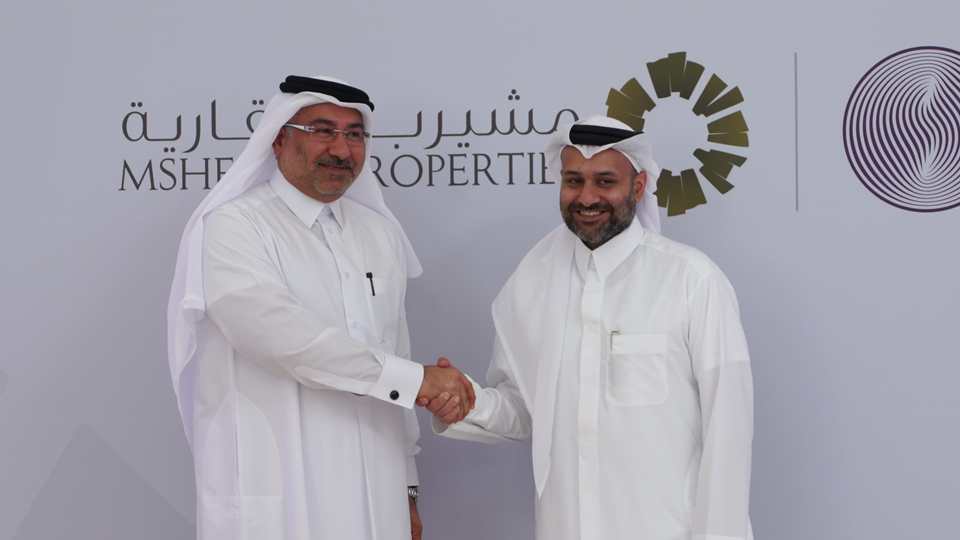